In the last post we set up everything in order to write a GCC plugin. Before we can go on we need to understand a bit how GCC compiles your files.

How to compile a file

For a lot of people, compilers are a bit like operating systems: magical. But they do not have to be!

When you do g++ -o my_program my_file.cc to compile a file, there are lots of steps involved in order to end with a my_program that you can run:

All these steps are performed by a tool that knows everything about the compilation process called the driver. In our case the driver is g++.

g++ invokes internally the compiler. The C++ compiler is called, for historical reasons, cc1. You can retrieve the path of the actual C++ compiler by calling g++ -print-prog-name=cc1. The compiler parses the code, optimizes it and then emits assembler code. This assembler is then linked using your system assembler (usually GNU as). This generates an object code file (a file ended in .o or .obj). These files are finally gathered by the linker (usually GNU ld) to generate an executable (or a shared library in the case of our plugin).

The representation used by a compiler is commonly called the intermediate representation and is an abstract way of representing the program that is amenable for analysis and optimizations.

The process of compilation is at its core a process of lowering. It starts from a very high level representation (the source code) with very high level semantics (i.e. meaning) in their syntax. The compiler progressively lowers the level of the language, by translating and materializing the high level concepts to lower level concepts. Finally, the lowest level is represented by the assembler code which is just a very thin syntactic layer on top of machine code.

Passes of the compiler

The lowering process performed by a compiler is usually defined by passes (or phases). Each pass computes just one thing or transforms the code in some specific way. This way, if needed, passes can be executed as many times as needed. For instance, it is not unusual that a transformation phase breaks some invariant of the compiler during the transformation. A pass run right after the transformation pass can then be used to restore the invariant property.

Most programming languages feature some form of control structures like if, while, for, etc. Working with them is a bit unwieldy and it is easier to abstract them away by using a structure called the control flow graph.

In order to make this post less abstract, let's modify our plugin so it prints the control flow graph using the Graphviz syntax, a very simple language to draw graphs.

First we need to change the initialization of our plugin so it registers a callback and a new pass.

In the code above, we start checking the GCC version and then we proceed to register a new pass to the GCC's plugin manager (line 141). The new pass is registered right after the cfg pass, which is the responsible of creating the control flow graph in GCC. Before this phase the CFG is not available. The pass is a class and we create an instance of it at this point (line 136), later we will see the definition of this class.

We also register a callback that will be called when GCC ends (line 143) we need this to end the graph. We immediately initialize the graph (line 145). Functions start_graph and finish_gcc are defined as follows.

The only thing these functions do is printing on the standard error the start and end of a directed graph (digraph) in the Graphviz language. Nothing fancy.

A pass is represented as a class that inherits from a GCC class called opt_pass. Since our class will work on GIMPLE, it will inherit from gimple_opt_pass.

GCC is currently transitioning from C to C++. In order to not to break much of the existing code, there are some remnants and alternative ways to do the same things. It is expected that this will be progressively migrated to a more full-C++ approach. One of the elements that still retains this old structure is the pass_data, which defines some properties of the pass. We have to define it before the definition of our class, and pass it to the constructor of gimple_opt_pass.

Lots of these fields do not make sense now since they are very internal to the pass manager itself. For now we can leave as they are.

The virtual method execute (line 49) of a pass will be called by GCC for each function being compiled. The function itself is received as a pointer of type function. At this point we can start emitting the control flow graph of the function in Graphviz syntax.

All other blocks have their content simply dumped. GCC provides several debugging functions and here we just call print_gimple_seq because the code of a basic block is a gimple sequence (gimple_seq). Every element of a gimple_seq is a gimple statement (gimple_stmt) but we will not be handling them today. Gimple statements are printed in a pseudo-C syntax, so it is easy for the compiler writer to see what is going on (line 66).

Basic blocks have outgoing and ingoing edges. In order to draw the graph it is enough to use the outgoing edges (or the ingoing edges, but not both unless we want repeated arrows). Similar to the iterator of basic blocks, there is a macro to iterate the edges of a basic block (line 63). We iterate the successors of the current basic block bb, bb->succs, and then we emit an edge from the current basic block to the target basic block. Two things to note here: the Graphviz syntax does not care if a node has not yet been defined when defining an edge (this is important when we have forward edges) and the names of the nodes are global to the graph, this is why our nodes (see lines 43 and 77) are of the form bb_<<fun>>_<<index>>.

The pass class still needs another method, but we will give it a bogus implementation for now.

Finally, to complete the code, there are some required headers and declarations at the beginning of the file.

Before we can test the plugin, we need to make sure the Graphviz package is installed in our system (in most Linux distributions the package is just called graphviz). We will be using the tool dot. Make sure you have it available.

In order to ease testing, we will change the check rule of our Makefile into this. Note if your system lacks xdg-open or it does not work, call the appropiate PDF viewer (usually evince or okular).

By changing test.cc we will generate a test.pdf containing a forest of control flow graphs, one for each function in the code. As an example, let's consider a very simplified version of the famous Fizz buzz. 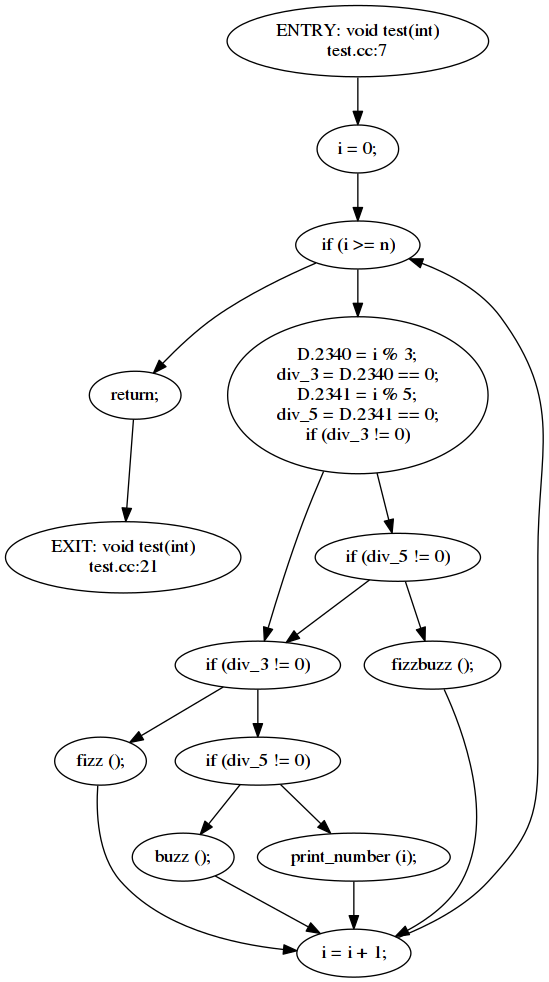 You may want to try this fancier version (only the test function is shown below, the remainder of the source code is the same). 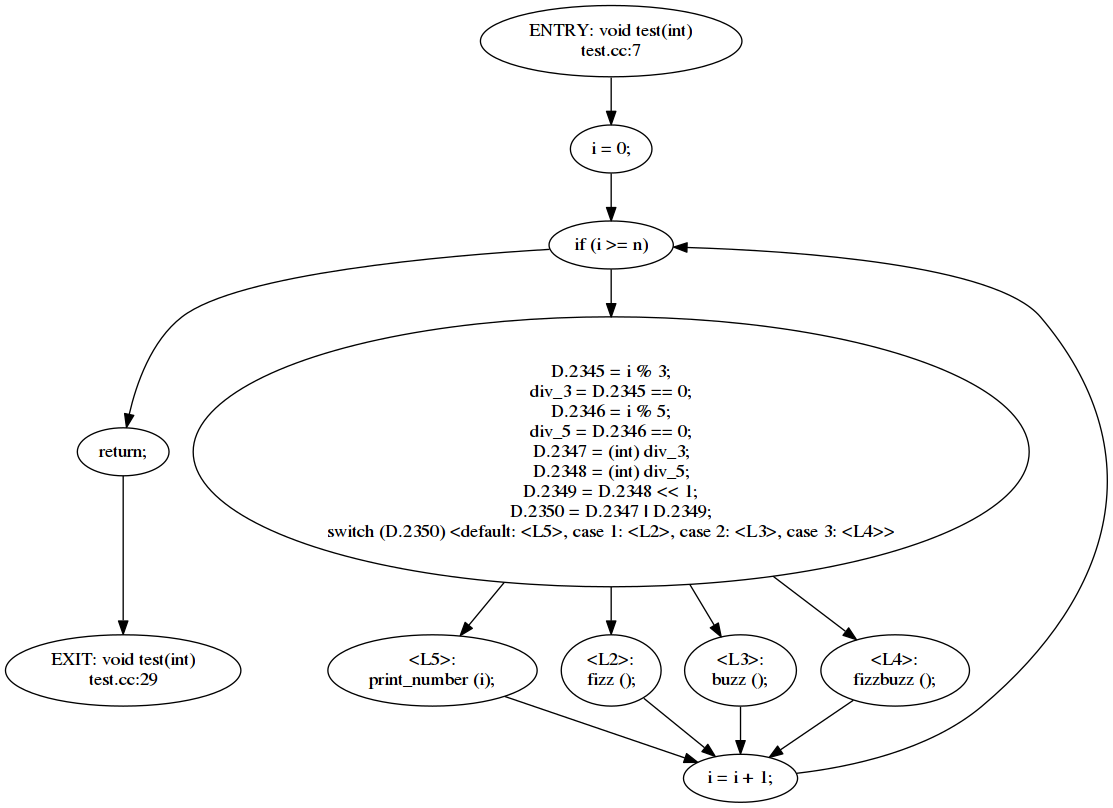 Now it is a great moment to test with different codes and get familiar with the shapes of the CFG. Next time we will address our original intent of writing a GCC plugin: emitting a diagnostic for unused result of functions returning class types with trivial destructors.

You can find the supporting code for this post here. Make sure you fix the GCCDIR variable in the Makefile.