Today we will see what happens when we nest a function inside another. It seems a harmless thing to do but it happens to come with its own dose of interesting details.

At the assembler level, functions cannot be nested.

In fact functions do not even exist at the assembler level. They logically exist because we follow some conventions (in ARM Linux it is the AAPCS) and we call them functions. At the assembler level everything is either data, instructions or addresses. Anything else is built on top of those. This fact, though, has not prevented us from enjoying functions: we have called functions like printf and scanf to print and read strings and in chapter 20 we even called functions indirectly. So functions are a very useful logical convention.

At the assembler level a nested function will look like much any other function but they have enough differences to be interesting.

Recall that local data, due to the stack growing downwards, is found in negative offsets from the address in the fp. Conversely, parameters passed using the stack will be in positive offsets. Note that fp (aka r11) is a callee-saved register as specified by the AAPCS. This means that we will have to push it onto the stack upon the entry to the function. A non obvious fact from this last step is that the previous frame pointer is always accessible from the current one. In fact it is found among the other callee-saved registers in a positive offset from fp (but a lower offset than the parameters passed using the stack because callee-saved registers are pushed last). This last property may seem non interesting but allows us to chain up through the frame pointer of our callers. In general, this is only of interest for debuggers because they need to keep track of functions being called so far.

The following image shows how the stack layout, after the dynamic link has been set and the stack has been enlarged for local variables, looks like for a function g that has been called by f. The set of data that is addressed using the frame pointer is commonly called the activation record, since it is a bunch of information that is specific of the dynamic activation of the function (i.e. of the current call). 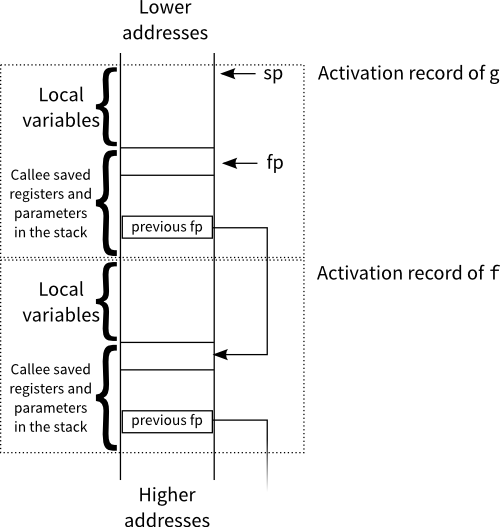 Consider the following C code (note that Standard C does not allow nesting functions though GCC implements them as an extension that we will discuss in a later chapter).

The code above features this simple case where a function can call a nested one. At the end of the function f, x will have the value 2 because the nested function g modifies the variable x, also modified by f itself.

To access to x from g we need to get the previous fp. Since only f can call us, once we get this previous fp, it will be like the fp we had inside f. So it is now a matter of using the same offset as f uses.

That said, though the idea is fundamentally correct, using the dynamic link limits us a lot: only a single call from an enclosing function is possible. What if we allow nested functions to call other nested functions (sibling functions) or worse, what would have happened if g above called itself recursively? The dynamic link we will find in the stack will always refer to the previous dynamically activated function, and in the example above it was f, but if g recursively calls itself, g will be the previous dynamically activated function!

Setting up a static link

Like it happens with the dynamic link, the AAPCS does not mandate any register to be used as the static link. In fact, any callee-saved register that does not have any specific purpose will do. We will use r10.

Setting up the static link is a bit more involved because it requires paying attention which function we are calling. There are two cases:

This may seem very complicated but it is not. Since in the example above there are a few functions, we will do one function at a time. Let's start with f.

Since f is not nested in any other function, the previous value of r10 does not have any special meaning for us. We just keep it because r10, despite the special meaning we will give it, is still a callee-saved register as mandated by the AAPCS. At the beginning, we allocate space for the variable x by enlarging the stack (line 35). Variable x will be always in fp - 4. Then we set x to 1 (line 51). Nothing fancy here since this is a non-nested function.

Now f calls h (line 57). Since it is an immediately nested function, the static link is as in the case I: the current frame pointer. So we just set r10 to be fp (line 56).

We start the function as usual, pushing registers onto the stack and setting up the dynamic link (lines 64 to 65). We adjust the stack so the stack pointer is 8-byte aligned because we have pushed an even number of registers (line 68). If you check the layout of the stack after this last adjustment (depicted in lines 72 to 79), you will see that in fp + 8 we have the value of r10 which the caller of h (in this example only f, but it could be another function) must ensure that is the frame pointer of f. This extra pointer in the stack is the static link.

After the call to g, the function calls m (line 92) which happens to be an immediately nested function, so its static link is the current frame pointer (line 91) because this is again the case I.

Function m starts pretty similar to h: we push the registers, setup the dynamic link and adjust the stack so it is 8-byte aligned (lines 106 to 109). After this, we again have the static link at fp + 8. If you are wondering if the static link will always be in fp + 8, the answer is no, it depends on how many registers are pushed before r10, it just happens that we always push r4 and r5, but if we, for instance, also pushed r6 it would be at a larger offset. Each function may have the static link at different offsets (this is why we are drawing the stack layout for every function, bear this in mind!).

Then m calls g (line 131). This is again a case II. But this time g is not a sibling of m: their nesting depths differ by 1. So we first load the current static link (line 129), the frame pointer of h. And then we advance 1 link through the chain of static links (line 130). Let me insist again: it is by chance that the static link of h and f is found at fp+8, each function could have it at different offsets.

Let's see now the code of g, which is pretty similar to that of h except that it does not call anyone.

Note that h and g compute the address of x exactly the same way since they are at the same nesting depth.

Below is a picture of how the layout looks once m has called g. Note that the static link of g and h is the same, the frame pointer of f, because they are siblings. 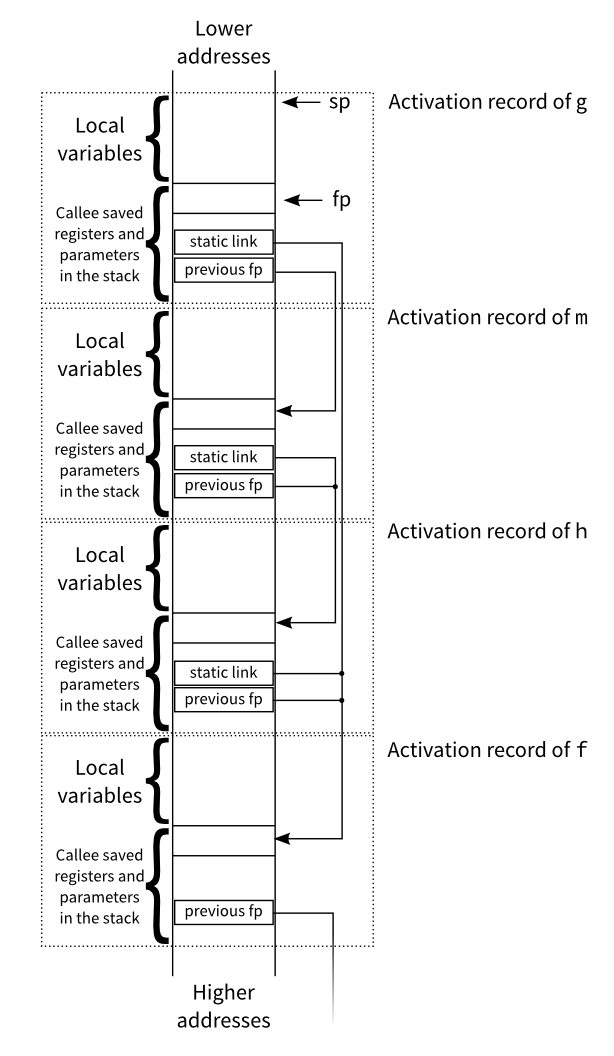 Below is the same image but this time using coloured lines to show how each function can compute the address of x. 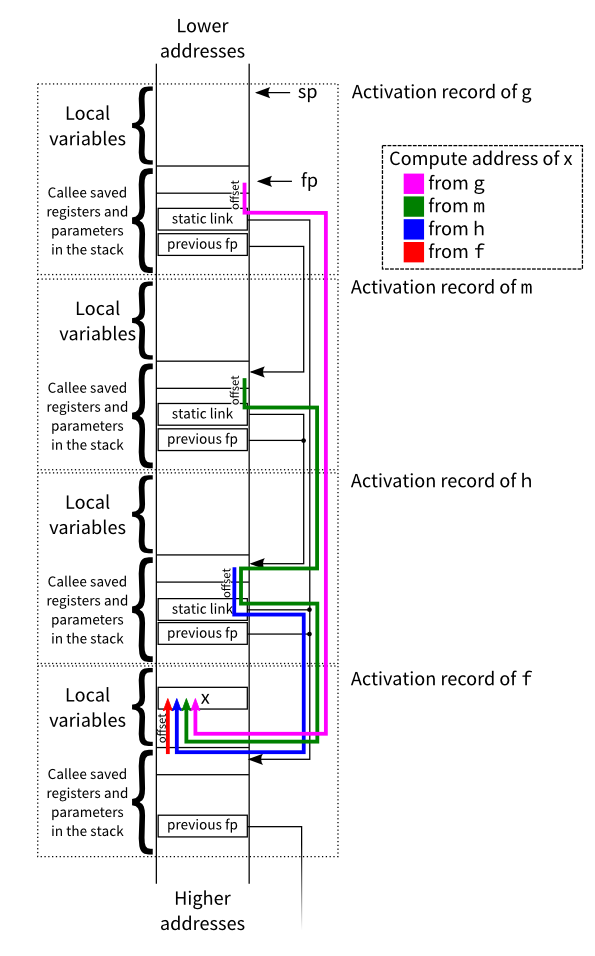 If you stop and think about all this stuff of the static link you may soon realize that there is something murky with all this nested functions business: we are passing some sort of hidden parameter (through r10) to the nested functions. In fact, we are somehow cheating, because we set r10 right before the call and then we push it at the entry of the nested functions even if they do not modify it in the called function. Why are we doing this seemingly useless step?

Well, by always pushing r10 in the stack, we are just covering up the naked truth: nested functions require a, somewhat hidden, extra parameter. This extra parameter is this static link thing. Sometimes it is also called the lexical scope. It is called the lexical scope because it gives us the context of the lexically (i.e. in the code) enclosing function (in contrast the dynamic scope would be that of our caller, which we do not care about unless we are a debugger). With that lexical context we can get the local variables of that enclosing function. Due to the chaining nature of the static link, we can move up the lexical scopes. This is the reason m can access a variable of f, it just climbs through the static links as shown in the last picture above.

Can we pass the lexical scope to a function using the stack, rather than a callee-saved register? Sure. For convenience it may have to be the first stack-passed parameter (so its offset from fp is easy to compute). Instead of setting r10 prior the call, we will enlarge sp as needed (at least 8 bytes, to keep the stack 8-byte aligned) and then store there the static link. In the stack layout, the static link now will be found after (i.e. larger offsets than) the pushed registers.

Can we pass the lexical scope using a caller-saved register (like r0, r1, r2 or r3)? Yes, but the first thing we should do is to keep it in the stack, as a local variable (i.e. negative offsets from fp). Why? Because if we do not keep it in the stack we will not be able to move upwards the static links.

As you can see, any approach requires us to keep the static link in the stack. While our approach of using r10 may not be completely orthodox ends doing the right thing.