Several times, in earlier chapters, I stated that the ARM architecture was designed with the embedded world in mind. Although the cost of the memory is everyday lower, it still may account as an important part of the budget of an embedded system. The ARM instruction set has several features meant to reduce the impact of code size. One of the features which helps in such approach is predication.

We saw in chapters 6 and 7 how to use branches in our program in order to modify the execution flow of instructions and implement useful control structures. Branches can be unconditional, for instance when calling a function as we did in chapters 9 and 10, or conditional when we want to jump to some part of the code only when a previously tested condition is met.

Predication is related to conditional branches. What if, instead of branching to some part of code meant to be executed only when a condition C holds, we were able to turn some instructions off when that C condition does not hold?. Consider some case like this.

Using predication (and with some invented syntax to express it) we could write the above if as follows.

The assembly line of instructions 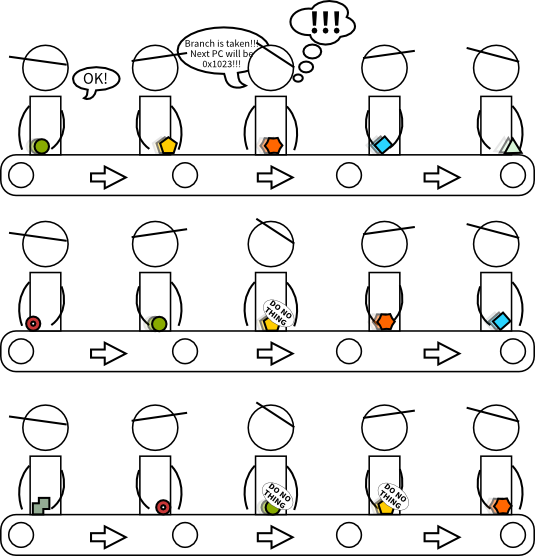 Truth is that modern processors, including the one in the Raspberry Pi, have branch predictors which are able to mitigate these problems: they try to predict whether the condition will hold, so the branch is taken or not. Branch predictors, though, predict the future like stock brokers, using the past and, when there is no past information, using some sensible assumptions. So branch predictors may work very well with relatively predictable codes but may work not so well if the code has unpredictable behaviour. Such behaviour, for instance, is observed when running decompressors. A compressor reduces the size of your files removing the redundancy. Redundant stuff is predictable and can be omitted (for instance in "he is wearing his coat" you could ommit "he" or replace "his" by "its", regardless of whether doing this is rude, because you know you are talking about a male). So a decompressor will have to decompress a file which has very little redundancy, driving nuts the predictor.

If we avoid branches, we avoid the uncertainty of whether the branch is taken or not. So it looks like that predication is the way to go. Not so fast. Processing a bunch of instructions that are actually turned off is not an efficient usage of a processor.

Back to our assembly line, the third worker will check the predicate. If it does not hold, the current instruction will get a do nothing sticker but in contrast to a branch, it does not notify the first worker.

So it ends, as usually, that no approach is perfect on its own.

In ARM, predication is very simple to use: almost all instructions can be predicated. The predicate is specified as a suffix to the instruction name. The suffix is exactly the same as those used in branches in the chapter 5: eq, neq, le, lt, ge and gt. Instructions that are not predicated are assumed to have a suffix al standing for always. That predicate always holds and we do not write it for economy (it is valid though). You can understand conditional branches as predicated branches if you feel like.

Ok, let's add some predication. There is an if-then-else construct in lines 22 to 31. There we check if the number is even or odd. If even we divide it by 2, if even we multiply it by 3 and add 1.

As you can se there are no labels in the predicated version. We do not branch now so they are not needed anymore. Note also that we actually removed two branches: the one that branches from the condition test code to the else part and the one that branches from the end of the then part to the instruction after the whole if-then-else. This leads to a more compact code.

Does it make any difference in performance?

Taken as is, this program is very small to be accountable for time, so I modified it to run the same calculation inside the collatz function 4194304 (this is 222) times. I chose the number after some tests, so the execution did not take too much time to be a tedium.

Sadly, while the Raspberry Pi processor provides some hardware performance counters I have not been able to use any of them. perf tool (from the package linux-tools-3.2) complains that the counter cannot be opened.

dmesg does not provide any additional information. We can see, though, that the performance counters was loaded by the kernel.

Supposedly I should be able to measure up to 3 hardware events at the same time. I think the Raspberry Pi processor, packaged in the BCM2835 SoC does not provide a PMU (Performance Monitoring Unit) which is required for performance counters. Nevertheless we can use cpu-clock to measure the time.

Below are the versions I used for this comparison. First is the branches version, second the predication version.

The tool perf can be used to gather performance counters. We will run 5 times each version. We will use number 123. We redirect the output of yes 123 to the standard input of our tested program. This way we do not have to type it (which may affect the timing of the comparison).

The version with branches gives the following results:

So the answer is, yes. In this case it does make a difference. The predicated version runs 1,44 times faster than the version using branches. It would be bold, though, to assume that in general predication outperforms branches. Always measure your time.