Suppose you have an iPod. Now suppose your music library size is by far bigger than your iPod memory. This is not an unusual situation, specially if your iPod is a Shuffle, Mini or Nano version, since the ones able to play videos usually have much more memory.

Now suppose you're a busy person or simply don't have the time to select what music you'll want to hear every morning before going to work, so sitting in front of your iTunes program and selecting what you thing you're in the mood to hear is out of the question. But of course, the chances you want to listen to different music from yesterday is high. And because you are a pragmatic geek, you're trying to find a way to perfectly update your iPod music to fit your needs automatically.

Smart playlists come to the rescue!

Here's the best solution I've found so far to solve this problem.

First of all, have a music selection of the albums you like the most. It has to be a small selection, so, although it may sound redundant, be selective! To do so, create a new playlist from the File menu as shown in the screenshot above. Now drag and drop your album selection there. When you're done, select the playlist and write down its size (you can see the size of mine in the screenshot above).

Now let's create a new playlist, but this time we'll select a smart playlist. Smart playlists are playlists that get filled according to some rules you may put on them, and the options can be combined each other with and and or clauses, so the possibilities are really huge. 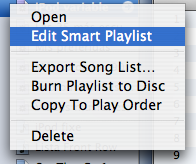 Once you have the playlist created, edit it and select the options you want for it. For example, to reach the goal we mentioned at the beginning of this post, the first thing we want from this playlist is that whatever gets in it, it's not in the fixed music playlist we created before. For the variety of songs, we could select some rule like the one that lets us select songs that have not been played in the last few days. And you should also select the maximum size of the playlist, being the size of our iPods memory minus the size of the fixed music playlist. If you want your songs to be grouped by albums you must select the option as well, as shown on the screenshots. Don't forget to have the playlist being updated in real time so it always has the corresponding properties met. You can set another options such as genre or artirst filtering, rating and a lot more options.

And voilà, it's done. Now you only have to plug in your iPod and, on the sync options, select those two playlists we just created. From now on you'll only have to connect your iPod to have it always updated with your favorite music and a selection of the rest of your music library according to your own preferences, with no hurries, without having to configure anything else, just plug and go!

« Sofa Control, or how to operate your Mac from the sofa The madness of captchas »